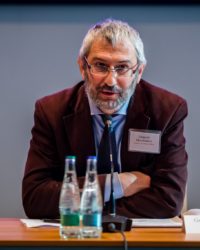 Grigorij Mesežnikov, president of the Institute for Public Affairs (IVO), Bratislava, Slovakia, is a graduate of the Faculty of Arts at Moscow State University (MGU). Between 1983 and 1993, he worked at Comenius University in Bratislava, from 1993 to 1997, he served at the Political Science Institute at the Slovak Academy of Sciences. He is a founding member of the Institute for Public Affairs (IVO), which he joined full-time in June 1997. In February 1999, he became the Institute’s president. Between 1994 and 1998, he was the secretary of the Slovak Political Science Association, while from 1996 to 1997, he lectured at Trnava University’s Department of Political Science.

He has co-edited and co-authored a number of books, including the Global Reports on Slovakia (1995–2011), the annually published comprehensive analysis of the country’s development in all relevant sectors of society (domestic politics, foreign policy, economy, social policy, etc.). He is a key author of the report on Slovakia in Nations in Transit published by Freedom House (1998–2014).