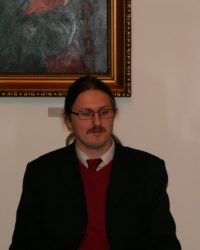 Vladimir Sazonov (Ph.D. in history) is a senior researcher at the Centre for Oriental Studies at the University of Tartu and analyst at the Estonian National Defence College. He has also worked at the Estonian National Defence College as an associate professor and researcher (2011–2016) and at the Baltic College as a lecturer (2016–2017). Vladimir Sazonov has studied at universities in Tartu, Tallinn, Basel, and Göttingen. He has been a visiting scholar at the University of Innsbruck, Bar-Ilan University, Istanbul, Berlin, Göttingen, Würzburg, Münster and Basel, Moscow, etc.

His research fields comprise Middle Eastern state ideology, religion, and state propaganda. Additionally, he is interested in Russian information operations and ideology. He has published scientific publications in Estonian, German, English, Ukrainian, and Russian (articles, volumes, and books). His last monograph (written in German) was published in 2016 in the U.S.A. by Jim Eisenbrauns.